AFEC is sponsoring The budgie smugglers at this year’s red bull flugtag. Our incredible team of local 40 foot swimmers will dance and fly our way into your hearts.

Dressed as the cast of Baywatch, including Handsome ‘Hoff,’ our team will emerge from behind the Budgie Smuggler. We have prepared a dynamic dance routine which will be followed by dramatic sea rescue. 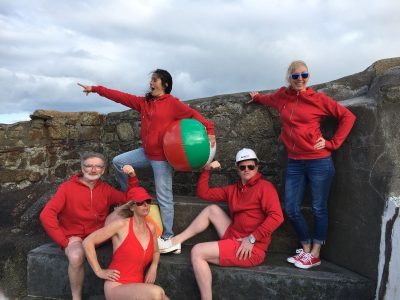 Flugtag pushes the envelope of human-powered flight but competitors need more than airtime to reach the podium. Teams are judged on three criteria: flight distance, creativity of the craft, and showmanship. These criteria have inspired flying tacos, prehistoric pterodactyls, and even Snoopy and the gang to grace the Flugtag flight decks!

We’ll be competing in this year’s event on May 20th, 2018. So mark your calendar and support AFEC at this years Flugtag.

The event will be held in DÚN LAOGHAIRE, Alexandra Rd Ext, Dublin at 12:00. You can vote for The Budgie Smugglers on the Red Bull website https://flugtag.redbull.com/irl/en/team-page/the-budgie-smuggler/

10
May 2018
By AFECFire NewsComments Off on AFEC is competing at this year’s Red Bull Flugtag
By continuing to browse the site you are agreeing to our privacy policy.